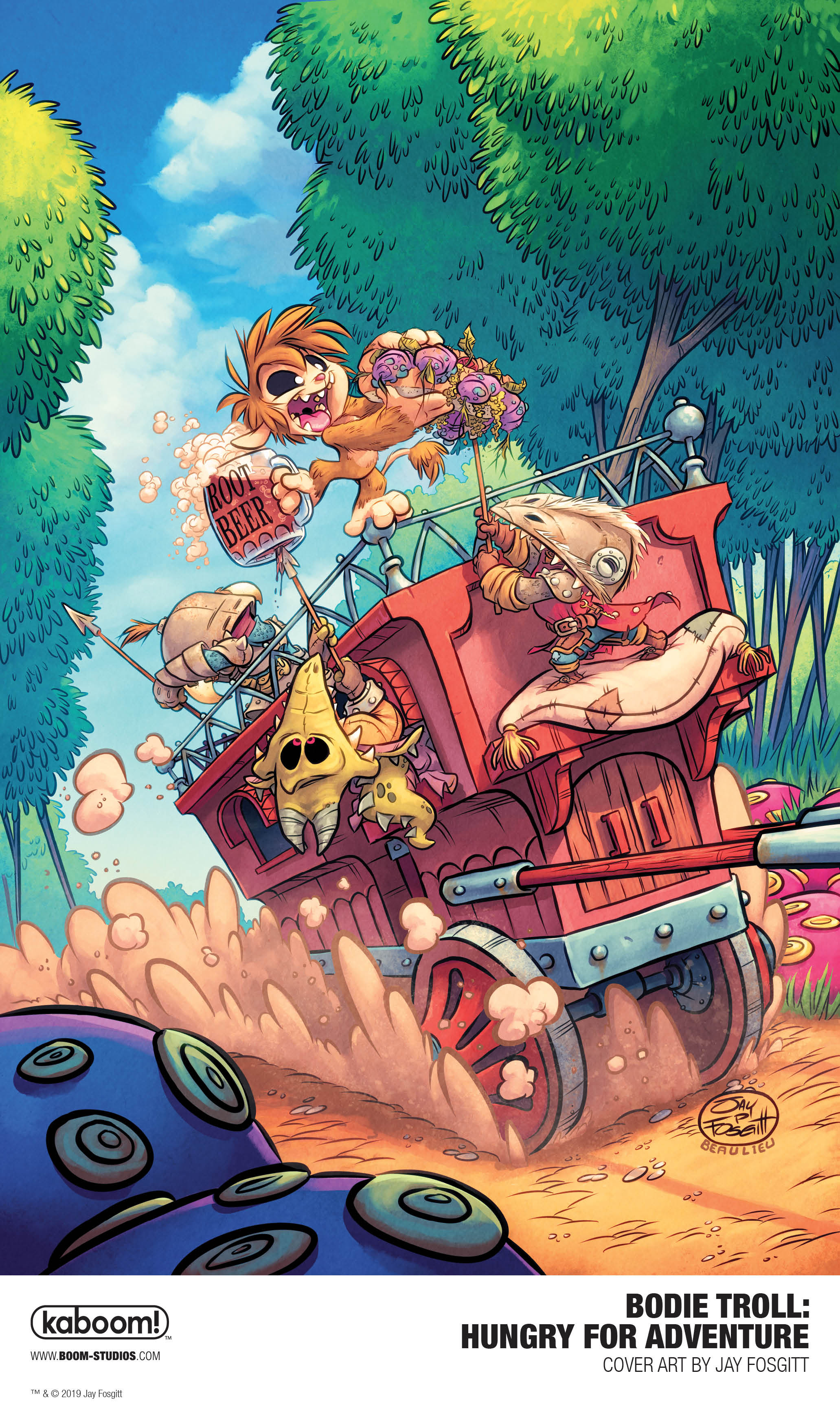 LOS ANGELES, CA (October 8, 2019) –  BOOM! Studios is proud to announce BODIE TROLL: HUNGRY FOR ADVENTURE, a brand new original graphic novel set in the world created by cartoonist Jay Fogsitt that brings the entire family a fantasy adventure that celebrates growing and evolving friendships, and the power in embracing what makes people unique.

Return to Hagadorn with an all-new original graphic novel featuring the friendliest (and, in his eyes, the fearsomest) troll around, Bodie! Get ready to join Bodie, his Fairy Godmother, and his best pal Cholly, as their adventures lead them to learn about Cholly’s past, uncover the mystery of the new bridge in town, and meet a group of creatures looking to destroy the world – through hugs.

“I am thrilled to continue my grumpy little troll’s exploits in BODIE TROLL: HUNGRY FOR ADVENTURE! I crammed so much character, adventure, drama and silliness into the first book that so many continuing adventures (along with brand new ones) have spilled over and filled this new graphic novel.” said cartoonist, Jay Fosgitt. “I still hold fond memories of being read to as a little kid, and so many parents have told me how Bodie Troll has become required bedtime reading so I created HUNGRY FOR ADVENTURE with the intent of inspiring the sweetest and goofiest dreams a kid, or their parents, could have. Bodie Troll takes classic fairy tale tropes and manages to milk humor and heart out of them while still paying respect to such classic stories, so it’s fun for the storybook fan in all of us, be they long time readers, or open young minds with a heart for adventure.”

BODIE TROLL: HUNGRY FOR ADVENTURE is the latest release from BOOM! Studios’ award-winning KaBOOM! imprint, home to comics for middle grade and younger readers including licensed series such as Adventure Time, Steven Universe, Regular Show, Ben 10, and Over The Garden Wall, along with original series like Just Beyond: The Scare School by R.L. Stine and Kelly & Nichole Matthews, Hex Vet by Sam Davies, RuinWorld by Derek Laufman,  Hotel Dare by Terry Blas and Claudia Aguirre, and Pandora’s Legacy by Kara Leopard and Kelly & Nichole Matthews.

“Bodie is back—with even more fun, humor, and hijinx than ever! Fans of the grumpy but hilarious little troll’s misadventures are in for a treat as Jay brings a brand new story that’ll have readers young and old laughing at all of the trouble Bodie manages to get into, ”said Chris Rosa, Editor, BOOM! Studios. “Also, we’ll get to see even more of the world in which Bodie, Cholly, and their friends have their daily adventures, discovering never-before-seen lands and a whole new part of Bodie’s past.”

Print copies of BODIE TROLL: HUNGRY FOR ADVENTURE will be available for sale in August 2020 at local comic book shops (use comicshoplocator.com to find the nearest one), bookstores, or at the BOOM! Studios webstore. Digital copies can be purchased from content providers, including comiXology, iBooks, Google Play, and the BOOM! Studios app. BODIE TROLL Vol 1 is available now everywhere books are sold.

For continuing news on BODIE TROLL and more from BOOM!, stay tuned to www.boom-studios.com and follow @boomstudios on Twitter. 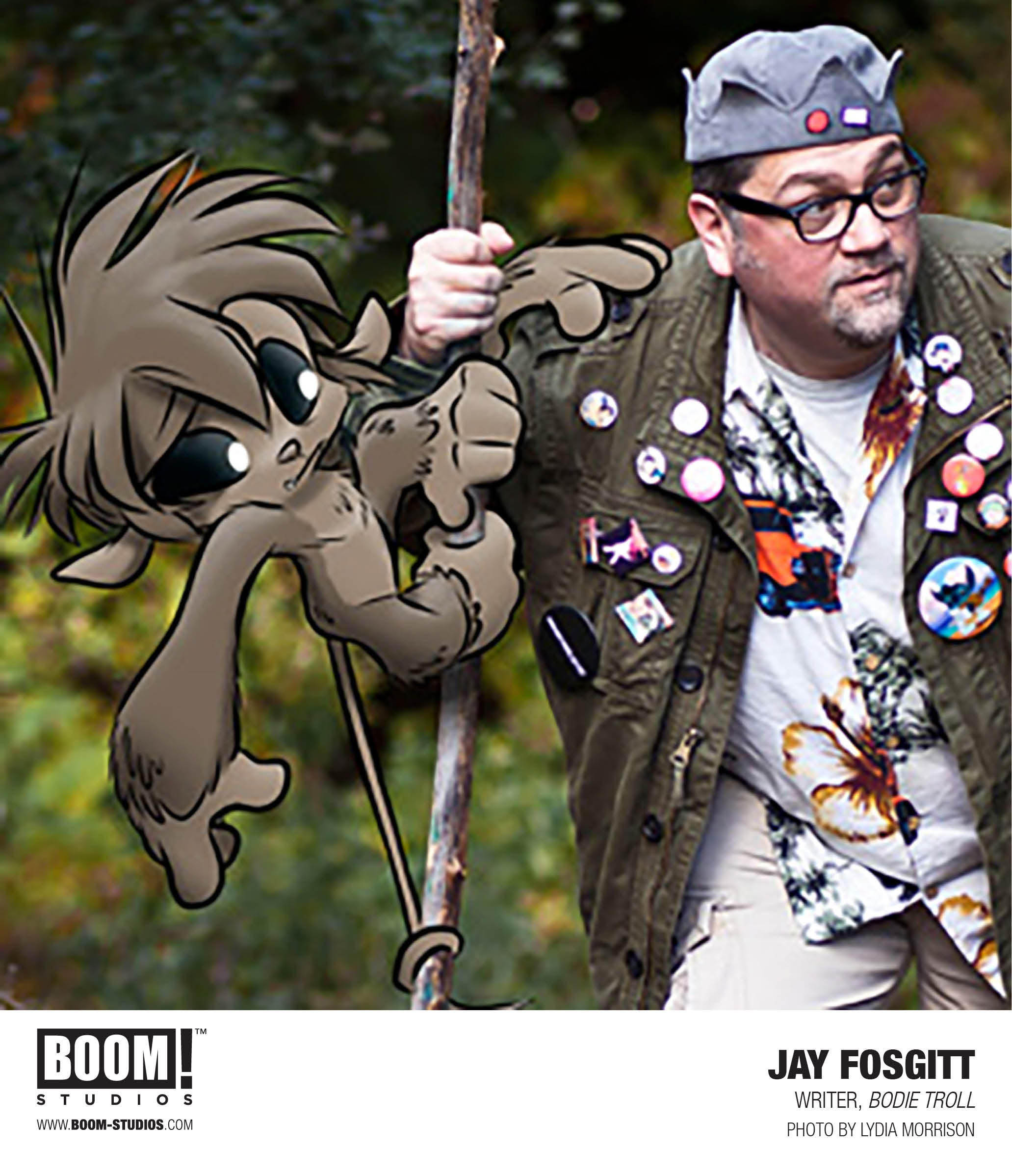