Renowned fictional comic book artist Mike Mason and alternate universe former Vice-President Joe Biden have very little in common. The commonalty is listlessness and set into a life which needs a bit of excitement. That very little exists though and through it machinations propels both their lives into crazy mysteries with as many twists and turns as the Los Caracoles. 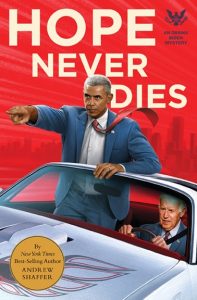 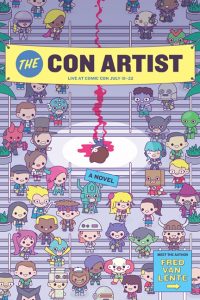 In Fred Van Lente’s THE CON ARTIST we get thrown into San Diego during its always tumultuous world of San Diego Comic Con AKA Comic Con International. We meet artists, writers, fans (crazy and normal), editors, publishers, criminals and even zombies (sort of). I mean what’s a comic convention without a zombie or two, and murder. Of course what is a murder mystery without a mysterious murder? Especially one that the protagonist finds himself wrapped into heavily by being a suspect themselves for many different reasons. While trying to prove his own innocence by solving the crime himself Mike Mason runs, jumps, parties, contrives and draws through the time at the convention. Littered with pop-culture references as well as original TV, movie and comic ideas, the novel takes you on what feels like an legitimate experience of the convention and all it entails, including visiting the Gaslamp district, seedy hotels, crazy after parties, the marina and more. There’s side kicks and neo-nazis, sexy cosplay players who also are pedicab drivers, and a one armed girl who is a huge fan of Mike Mason because one of his major creations is a one armed warrior. The book is even full of illustrations done by the excellent Tom Fowler meant to be from the sketchbook of Mike’s, which he describes through out as he tries to keep his sanity. The only thing truly missing is a visit to the San Diego Zoo, but most people are lucky to find time to do that when trying to enjoy, endure and survive the media explosion that is SDCC.

While over in Andrew Shaffer’s HOPE NEVER DIES we find ourselves on the other coast of the nation in Wilmington, Delaware. It is a town with a long political upheaval. A melting pot city broken up into structures of poverty and comfortable. There’s local police, small town diners, a local motorcycle gang, civil up-rest living side by side and it feeds directly into the Amtrak towards Washington, DC. Home to a long time senator who moved to the area in his early teens and by the 1970s was the senator for all of Delaware till his two terms serving under the President. In the narrative it’s been six months since the new regime had taken office in early 2016, Joe Biden is now living in a nice home with his wife and dog and no longer has protective service. He is just a citizen, till circumstances of a long time acquaintances death seem possibly mysterious, or at the very least leave questions open. The information and the strange evidence is brought to him by his best friend Barack Obama; and after Joe uses some finagling and his own resources getting more info he finds himself teaming with Barack to find out the truth behind this death. Along the way they encounter cops, secret service men, more evidence, red herrings, drugs, injuries and they both begin to remember that no matter what, in the battle, whatever it is, we keep going; we believe whatever we did on this life was enough and that title of the book isn’t just a saying, but a way of life.

Through these two books, both out today in bookstores and other places you buy books QUIRK continues to solidify it as a publisher with a very distinct curation. Seeking things that are different, but altogether familiar using pop-culture themes one can all identify with while presenting entertaining news stories which one could easily see adapted into comics, film, television or cartoon.

THE CON ARTIST by Fred Van Lente (published by Quirk Books) is priced at $14.99 and is available in paperback and e-book
https://www.quirkbooks.com/book/con-artist

HOPE NEVER DIES by Andrew Shaffer (published by Quirk Books) is priced at $14.99 and is available in paperback and e-book
https://www.quirkbooks.com/HopeNeverDies

I also recommend following both authors on Twitter (and other social media) as well as Quirk books:
@fredvanlente
@andrewtshaffer
@quirkbooks