Cool Dad will always be cool! 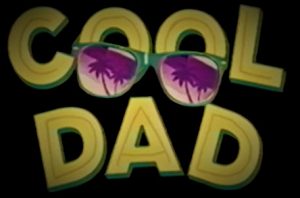 I made a tweet or two about how much I loved Cool Dad-Official Trailer on [adult swim].  I expressed simply what I wish I knew more about it and amazingly co-director/writer/creator Ariel Gardner sent me a message asking what I wanted, then proceeded to give an excellent Post-Mortem, stating I could contact him if I had follow-up questions.

ME: Everything Ariel, from conception to the final product. How it was devised, why, developing the full on crazy logos, getting the actors, having it be an [adult swim] “infomercial” versus anything else. I’d love an entire post-mortem.

Ariel’s long thread reply:
It’s something we’d been giggling about for years to do as a sketch, but we knew we couldn’t do it without money. Adult swim brought us in to pitch ideas and fortunately they liked that one best, it was our favorite too.

Initially it was built around the idea “Jelly Daddy”, which was in the script as the second beat after cool dad until just before shooting.

We were having trouble executing the concept and then we realized family guy had already done a dad with no bones concept anyway, so we scrapped it, restructured the script with planty daddy

Also the climax of our first draft had to be completely rewritten at the last minute as it was becoming clear it would be unfeasible to shoot with our budget.

The initial idea was the trailers would start coming faster and faster with all sorts of daddy premises until it devolved into sort of This Boy’s Life evil stepdad story until he wishes for his dad back. Would’ve been fun and more chaotic, but I prefer how it turned out

Jerry was our first choice and we were so happy he said yes. He’s a great guy. Andrea we’ve always been a fan of from her work on Stella. Parker the son is someone we’ve been working with for a long time, initially on our web series “fishbowls are definitely my thing”

Nathan the cop is a long time friend, the others were suggested to us by abominable and they were perfect

As to why it was devised, idk, as long as I’ve been alive there’s been so many father-son centric family fantasy comedies, the repetitiveness of these concepts seemed like a fun idea to play with and was right in our wheelhouse to write

It was ambitious but accomplishable and we laughed a lot throughout the whole process. A fun culmination of all the sketch work we did over the years. V grateful adult swim took a shot on it.

And here are the follow up questions I sent.  I actually sent them all at once, but for ease of reading have it broken down and edited structure by question/answer where applicable.

ME: When was Cool Dad shot? Jerry has been so focused on his new cop show that I wonder if it was awhile ago? How long was the shoot?

ARIEL: We shot late last year, maybe late October or early November.  It was a one day shoot. The original script had a lot more to it and we had to do everything we could to wrap it all in one day.

ME: In terms of structure of something with a more complicated linearity in which it might take a viewer a second to get it, how was the shoot structured for continuity?

ARIEL: Not sure if this question is what you mean, but the shoot was structured by location. We would shoot all the pieces in one part of the house with two cameras then quickly change wardrobe and shoot the next one. (ed note: this is exactly what I meant.  Knowing it was shot location to location helps perspective of editing)

ME: Do the fake names of the director, writer, etc. have any significance?

ARIEL: I came up with a list of fake names and those were the ones that happened to be cleared legally. No significance but fun to do. Stan Loriette is something our editor uses a lot apparently. Timothy Michael-Creeksy is my personal favorite.

If you haven’t seen Cool Dad!-Official trailer yet, go do so here:
http://www.adultswim.com/videos/infomercials/cool-dad-official-trailer/