New York, NY (April 19, 2018) – Five Points Festival, a designer toy, street, and alternative art festival is excited to announce the return of the much-anticipated event for 2018! Taking place the weekend of June 2-3rd, 2018 – at the awesome Brooklyn Expo Center, the festival will bring together the shining stars of the Designer Toy, Kaiju & Sofubi, Craft Beer, Food and alternative art worlds.

Featuring a dynamic lineup of counterculture artists and artisans from around the world. The event is a 2-day celebration of toy designers and customizers with an extensive international Neo-Kaiju and Sofubi section, original street art, independent comic artists, gourmet food trucks and craft beer presented by Clutter Magazine and sponsored by 50 Years of The Outer Spacemen, and Lagunitas Brewing Company.

Enthusiasts familiar with art toys will have the chance to meet some of the world’s most iconic artists and brands like Huck Gee, Instinctoy, Kidrobot, James Groman, Jason Freeny, Ron English, Super7, Tara McPherson, and Mighty Jaxx on the show floor, where they will be featured alongside artists from the U.S., Japan, Germany, Korea, the U.K. and elsewhere, some showcasing in NYC for the first time, and all with unique, original pieces for sale. Anyone who has attended mainstream art shows or comic cons will find something completely unique at Five Points – a gathering of visual innovators, rebels, creators, and the misfits that are driving the future of commercial & counterculture art.

Tickets to Five Points also include access to a gathering of some of NYC’s outstanding craft breweries and food trucks serving during all regular Festival hours. VIP Ticket holders will gain special early access privileges each day of the Festival, as well as entry to Friday night’s Designer Toy Awards, the world’s premier accolade for designer toy artists, and an all-around excellent party.
Join us at Five Points Festival at the Brooklyn EXPO Center for designer toys, art, craft beer & food, and so much more…

Roll like a P.I.M.P – Get a VIP ticket for Five Points Fest 2018, Designer Toy Awards & Early Access and MORE!

DTA Ticket – Party with us at the Designer Toy Awards and rub elbows with the best in the industry! – THE ONLY WAY TO GET A TICKET!

VIP Preview – Get in an hour early both days 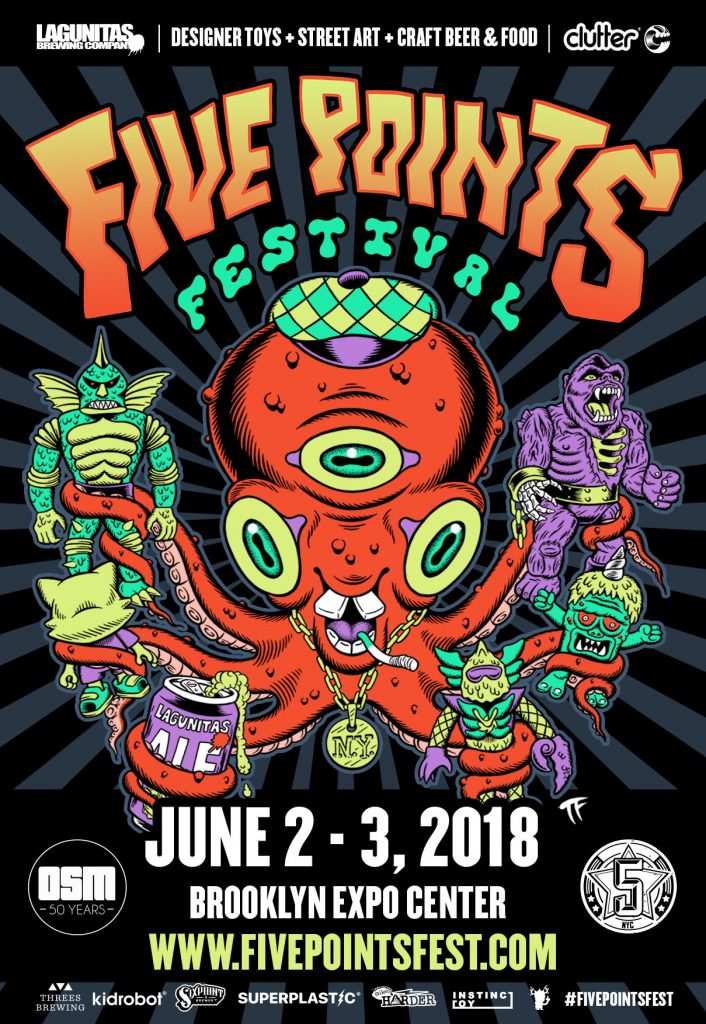