Give Me Some of Those Funky Fresh Beats

What if I told you a game could truly deliver almost everything and deliver it in package that explored almost every visual style that video gaming has used? What if I told you this same game could use recycled jokes, tropes and find brand new ingenious spirited ways to make them feel new and inspired and make you laugh with joy & excitement all over again?

What if I told you in 2017 the adventure game point n click scene was still alive and flourishing more then before and thistime it was being kept alive by Germany or some other European country but that America, the UK and other countries where they speak English… like… um… erm… Australia.

Well it is and they do… this time I’m talking about a post apocalyptic mutant genre bending humor escapade called Paradigm, an eponymous title of the hilarious adorably gross disgusting cute lead character you will “control” throughout this adventure (does one ever truly control or do we just guide them through predetermined conclusions of the dressing of puzzles and interaction to deliver a story but in an interactive environment? A discussion for another time perhaps.)

Jacob Janerka, ALMOST solo creator of this brilliant, stupid, silly, wonkers, what am I doing here, I love this, oh my god I’m going to throw up art project is an amazing illustrator and designer. Every painting in this is lovely even when it’s showing a super weird creature, every pixel piece lovingly developed and boy is there a lot of 2D pixel goodness, but not in the point n click game genre. The way the game used 2-D is so almost mind-bending because it’s unexpected and needs to be experienced to truly appreciate it utter ridiculousness yet perfection. 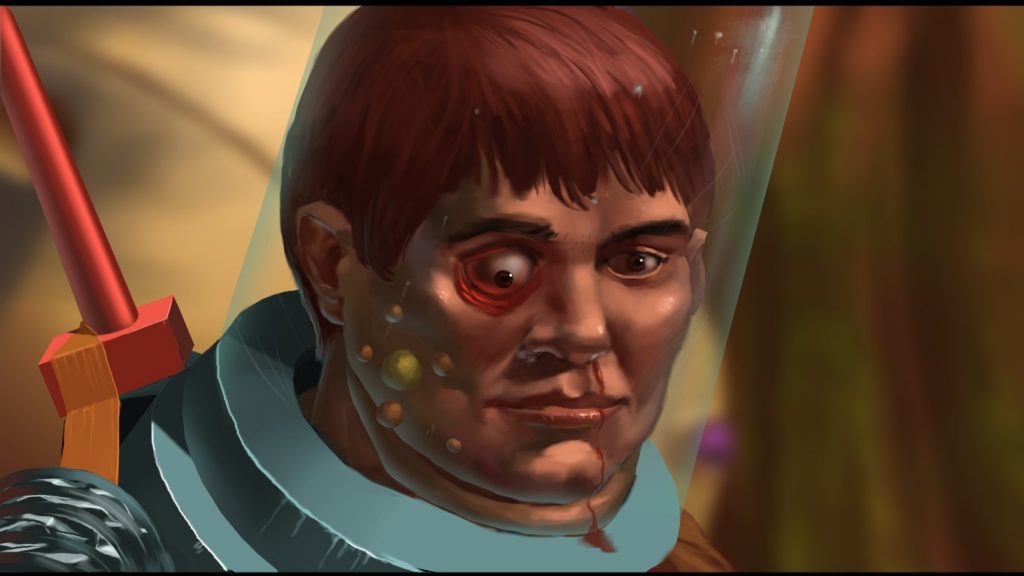 Just one of the ugly pretty mutants you’ll meet.

To get a really good idea of how wacky, wild, weird, funny, silly and also how awesome an artist he can be, other than Paradigm one just needs to scope the proposed Seinfeld point n click he started developing while finishing the game. It went a tiny bit viral and Nerdist featured it last year.

The fact alone that Jacob wants/wanted to bring a show about nothing, in which you’d basically do nothing and yet for some inexplicable reason laugh at things that aren’t funny gives you some hint into maybe how his mind works… or maybe doesn’t work. 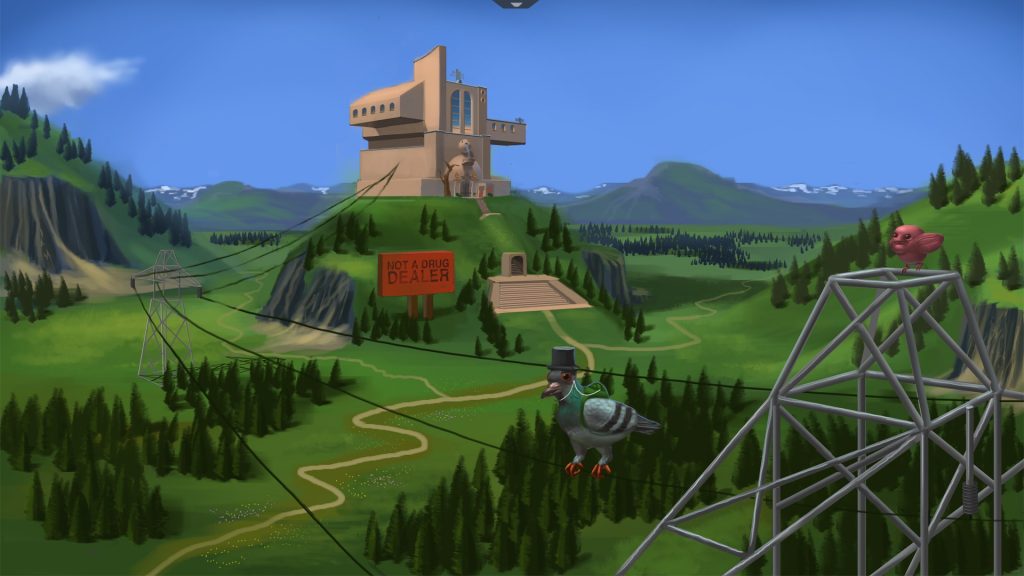 An example of Janerka’s amazing painting skills. Look at this vastness. Look at that crazy pigeon.

There are some “what are you serious?” ideas in the game where you wonder if he’s crazy with skills or just really talented. Here are some ideas you usually don’t expect in a point n click without actually spoiling the game itself.

Another great addition which will having you play multiple times so as to not ruin your immersive experience the first time around, or maybe you will ruin your immersion and just do it on every screen, but you’ll probably forget so you better make saves or yes, you’re playing all over again is the Developer Commentary. These are thing that have existed throughout time but traditionally only remastered games (like the ones Doublefine has done of LucasArts) get them. Very few games have them on release of a brand new Intellectual Property. I honestly can only think of the games by Wadjeteye/Dave Gilbert to have done this. Jacob takes it another step though and does it is as a visual treat on top of the audio. It’s just a thing… a very artsy thing. There’s commentary also from the game’s musician Jonas Kjellberg (which I haven’t even brought up… it’s another layer all together).

Jonas Kjelberg created sounds, beats, synthwaves, guitar hooks, belly slaps, snores, boops, blips, and more. The music in this game is so wonderful it needs an entire article of its own to be truly explored. Luckily there is a soundtrack coming at some point, as it needs dissemination, deconstruction and reverberation. To be truly appreciated. Each piece works within the construct of the game, but also sound like they’d be amazing on their own. 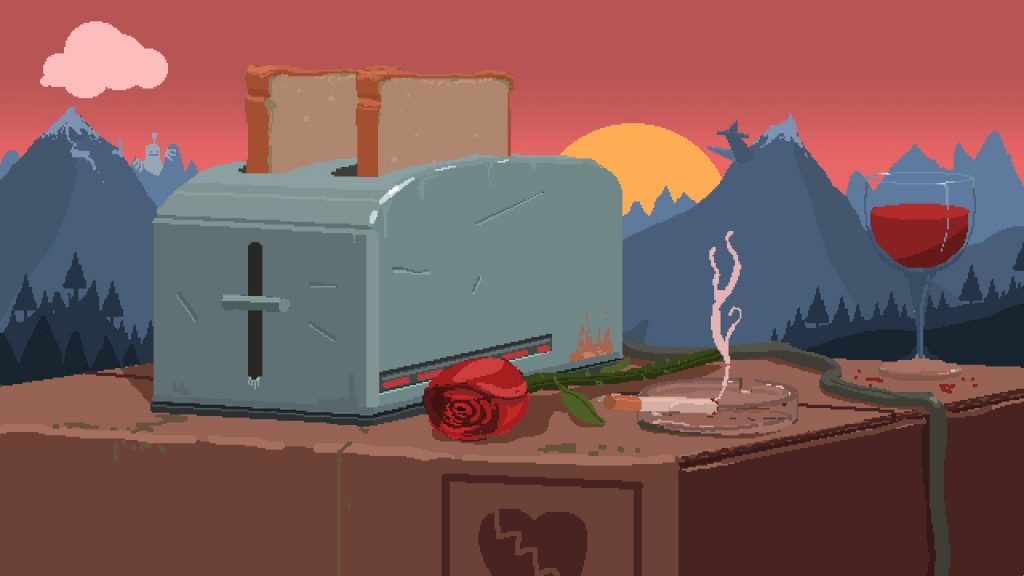 Another piece of 2D pixel work. Here you are dating a toaster. Yes, you read that correctly.

One of the things I really love about the game is how original it is while doing BLATANT tributes, self deprecating itself to what came before, while acknowledging how different and special it is, while at the same time being ludicrous and a waste of time. Yet isn’t what all entertainment is? Something to appreciate and waste time? What else would we do? Be productive? To what end? To the end to be able to sit down and waste time with others creations and then be inspired to make our own creations and then the cycle begins again. Mundanity, Insanity, Back to 1 till we die. Yet till that comes, take some time out of your schedule to play PARADIGM.

Paradigm is currently (released April 5th, 2017) on Steam for $14.99.
You can also get it at GOG.
Or if you prefer The Humble Store.
And if you’re reading this week of April 5th, it’s 10% off… if not… it’s more and still completely worth it.
It’ll run on PC and MAC (Linux is in the pipeline). Jacob Janerka also wants you to know that he unironically listens to ABBA regularly and thinks about if dogs have internal monologues.