In 1987 at the tender age of 10 I had owned a Commodore 64 for a few years, falling in love with Infocom, Sierra, Tellarium and other individual games in the adventure genre. It was in October of that year that like many others my mind became warped, disturbed and happily pushed on a path of no return with the release of Maniac Mansion. The SCUMM system developed Ron Gilbert, Garry Winnick, David Fox and the rest of the team at Lucasarts changed gaming as we know it so many ways. My love for adventure games and point and click grew from that day, getting my hands of everything from LucasArts as it came out, but I’d actually follow Ron Gilbert and Gary Winnick as closely as I could as they moved onto other works. Humongous Games was for kids, but dang it if you couldn’t find enjoyment in Freddi Fish, Pajama Sam and Spry Fox you didn’t like fun. Especially fun, while less a Ron Gilbert game and more Dave Grossman, was Moop & Dreadly. The Cave was definitely something new, different and unexpected, but Ron’s concepts were still clear. His out there thinking for puzzles and his abstract writing. Yet still nothing he had done ever felt like it captured the spirit of his early work.

That all changed with Thimbleweed Park; and not just because it literally feels like a lost Lucasfilm game from say 1992 (the game takes place in 1987 but Pixel art was definitely not at this level yet) right after Lechuck’s Revenge but before Day of the Tentacle with Double Fine’s Tim Schafer. Having the team that developed Maniac Mansion come back together to devise a truly new, but old classic point and click adventure born from the new fundraising and therefore self publishing platform of Kickstarter has allowed for something that was probably just like Broken Age was once envisioned into something bigger, prettier, more vast and more impressive then ever imagined when originally conceived. In fact as I played through the game I could not believe how epic it became. While only taking place in a small town, the scope of the story and the way it is told will blow you away and catch you off guard in surprising and wonderful ways. 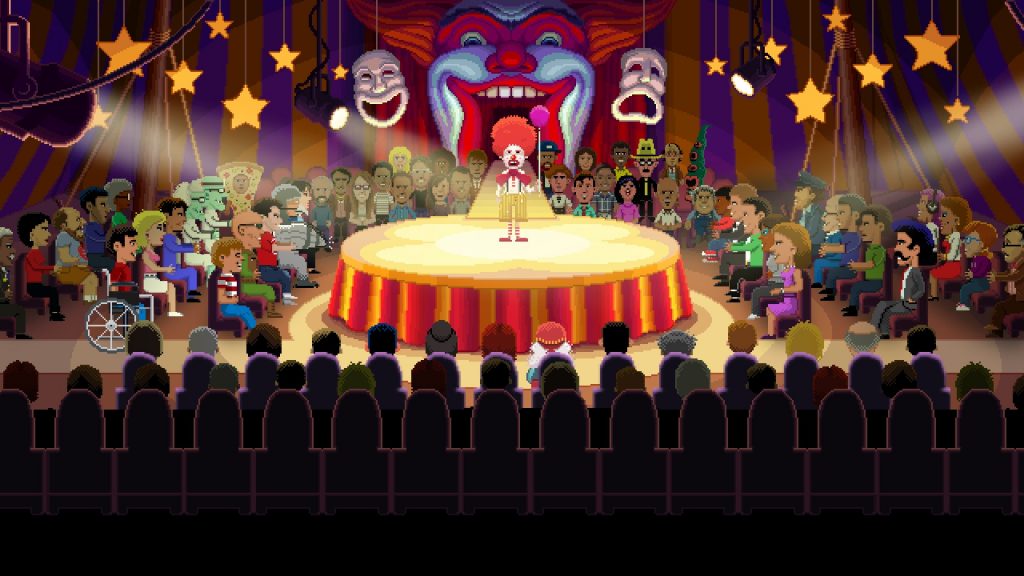 Thimbleweed Park is beautiful. Every inch of it despite being pixels is dazzling. The characters truly become alive with powerful animation, true detail and grit. Helping this is of course the scripting of Gilbert and David B. Fox. Making these characters truly real is the amazing cast though. Thimbleweed Park is through and through a true puzzle game in which hard mode, your brain will get twisted and twizzled to the point of maybe being fried, but at the same time, you are never truly stuck. The solution is probably staring you in the face. You must remember this a game of five distinct characters and you play them all and can switch between one. Like Maniac Mansion you rely on each other to solve certain puzzles. It’s a fun and exciting thing that can really only be experienced in a video game. Helping yourself out by helping yourself but as two people? In the real world or in most video games that involves another actual human, but in adventure games, you get to be both people. It’s amazing… and as I said while it’s a game through and through, the cast really brings it to life.

Acclaimed voice director Khris Brown put together some amazing folks for this. Nicole Oliver, an anime American adaptation legend, who most recently is known for her work My Little Pony: Friendship is Magic and has worked on another Ron Gilbert game in Death Spank plays the tough as nails FBI agent. Ian Garret, the most popular voice of Dragon Ball’s Goku and the voice of multiple characters on Ninjago and a long list of roles brings Ransome the Clown, the game’s most interesting, funniest, and wildest character to life invoking a bit of Norm MacDonald, Gilbert Gottfried, Bobcat Goldwaith and Sam Kinison to create a guy you can’t but love to hate and hate to love. Our wayfaring ghost without a chance, who whines and whimpers but is a joy to play as is given a bit of gravitas and sympathy by Alex Zahara, a longtime character and voice actor of stage, small screen, anime, games and most recently Amazon’s hit series Man in the Highcastle as Diehls. Rounding out our main cast are Javier Lacroix, a Spanish actor with a long list of commercials to his credit as deceptive to his actual age, as he sounds perfect as the young, seemingly mysterious other FBI agent and Elise Kates, a sound designer who has worked on Girls Makes Games The Hole Story as what could be considered our lead protagonist Delores, a game developer who returns home to Thimbleweed Park just as the mystery begins who is right in the middle of it all. 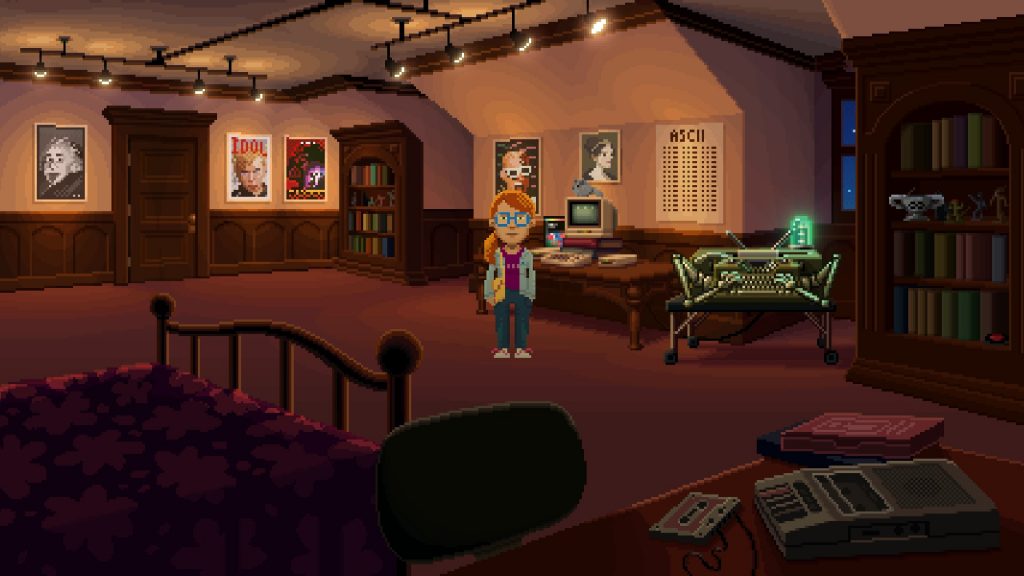 One of the cooler parts about Thimbleweed Park is once it’s said and done there are so many reasons to go back, especially on Steam as there are a few wonderful achievements. Yet, on top of that, unless you plan to sit through them all on a first play-through drastically causing pacing to the story to go to a crawl there tons of books to read as well as phone messages to listen to for the completest in you. They just add another layer to the actually to the game and it’s creation from day 1 to release and should truly not be skipped to feel fully immersed in the town and world created.

Thimbleweed Park is available for $19.99 on Steam, GOG, Xbox Live, and Mac App Store as of Launch, with other platforms coming in the near future.

(This review was built from an advance copy of Thimbleweed Park, which I finished days before launch and has kept my mouth shut about even though I want to talk and hear from everyone about it. Go play it folks, beat it, then talk talk talk talk talk and then talk some more)