In 1998 I was in third year of college and working hard. I’m not even sure how I found time for video games, but I did and on top of that heap was Grim Fandango. Up to that point I was a Lucasarts adventure game for lifer starting back with Loom. When Grim Fandango came out I can’t really remember the marketing at all, but I knew the Day of the Dead plot and that it was from the mind of the same person who made Day of the Tentacle and Full Throttle and that was enough for me to grab it up for whatever probably outdated PC I had at the time. 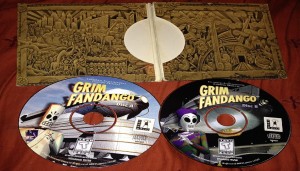 Truthfully though I don’t think I ever beat it. I do remember being amazed by the music though. Peter McConnell at that point had cemented his abilities with various LucasArts games but he seemed to become super inspired through Fandango’s mexican jazz and noir influences. That music would stay with me for years past ever actually touching the game. What also got me was that voice acting. At that point the lead, Tony Plana was a pretty established character actor with multiple film and TV appearances and an impeccable voice for comedic timing while still coming across as serious. Equally Alan Blumenfield who at the time was also one of those character actors who fell under the “hey, it’s that guy” was just perfect as the super energetic bounce off Plana’s cool and collected. The rest of the cast was full of known acors as well, but what stood out for me then and NOW was Pamela Segall. That was the coup of the voice casting, she was a former child actor and known cartoon voice actress at the time so hearing that she would be part of Grim was exciting. Honestly though I don’t know if I ever got far enough in the game to actually hear her in 1998. Those tank controls were… well, like controlling a tank. A headache and a half. I don’t care what Tim Schafer thinks… they aren’t fun. They’re a new device never used in an adventure game adding to the difficulty, but they also took away from the fun and ability to enjoy his clever script, engaging puzzles and curious plot.

Thankfully, in 2015 that all got fixed with Grim Fandango Remastered. Over the years I’ve tried using the fan made systems to play Fandango on new windows and even tried the fan made P&c scheme, but it just never felt… right. Multiple crashes and other doohickey annoyances made it nigh impossible to finish… even more than the the old tank controls.

While Remastered allowed me to finally play Fandango from start to finish without having to rely on tank controls even then it wasn’t completely easy. The game is difficult and has certain puzzles that were more annoyances then puzzle solving (ex: the section getting past skeleton tigers, and in the same general area, following an arrow). So it wasn’t the game I loved. In retrospect now as I sit here thinking of the experience, the game is actually not fun… but the acting, the script, the characters really just propel you to go forward. Some of the logic puzzles are equally obtuse as any adventure game, but the way they play out are either funny or justified in a way that made me continue and nod in a “allright, that works”.

What really makes Remastered special isn’t being able to play in a new game style way though. It’s the extras and bonuses. The commentary tracks are amazing and cover so much ground. There are interviews with not just Tim or Peter, but also the designers, the programmers, the casting & voice director and everyone in between. The making of the game is truly explored in fun and interesting ways along with a large gallery of design art including unused cut scenes and a full storyboard. On top of that the amazing soundtrack has truly be remastered and in cases re-recorded using a symphony guided by McConnell. It’s a wonder to hear and behold and makes playing so worth it.

The only thing not included (as far I could tell) was the original puzzle document. Fortunately that wondrous piece is still on the internet. Don’t read it till you’ve beaten the game though.

GRIM FANDANGO Remastered is currently available on PC/Mac and Linux DRM-Free and Steam as well on PS4 and PS Vita for $14.99.