Get Lost with Adi Alsaid (You’ll be glad you did)

At the end of July 2014, Adi Alsaid‘s first mass market novel for teens, LET’S GET LOST, hit shelves.  I was first introduced to Adi at Book Expo America a few years ago when randomly at a panel he sat next to me and we struck up a conversation.  He handed me his self-published book SOMEWHERE OVER THE SUN which I loved and I saw a future for Adi.  Fast forward a few years and that future is here, published by Harlequin, National tour and a marketing campaign that actually featured a physical car decked out as an ad.

LET’S GET LOST tells the tale of a single amazing girl through the eyes of the various people who meet her.  Adi Alsaid has an excellent handle at different voices and does so deftly.  He is truly a fantastic writer as I originally discovered with his first book.  He has an incredible use of word play.  You owe it to yourself to seek out both books, but definitely do not miss Let’s Get Lost.  It’s the true start of what I think can be a great writer’s career.

Adi was willing to take questions for me for an interview and he provided some really amazing answers.  I was able to come up with what I felt were four very meaty analytic questions that also provided more review structure and statements from this fantastic young author.

1.) In your many travels and life through Mexico, California, Vegas and Israel. can you name actual singular favorite locations. Such as favorite restaurant, quiet spot to read, etc.

My favorite bench in the world is in Pacific Grove, California, facing out at the ocean beneath a beautiful tree. An ice cream shop in Tel Aviv called Iceberg has lines out the door past midnight. Vegas has incredible spots to view the sunrise and the sunset. Mexican breakfasts are the best, no matter what kind of restaurant you go into. 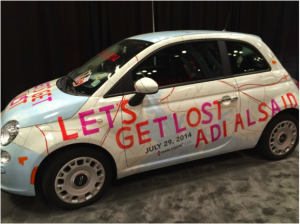 2.) What was the journey from writing and self publishing to being picked up by Harlequin? Is there anything you miss from self-publishing? What do you enjoy most about being with a large publishing house?

I went to BEA a few years ago as a struggling writer, just trying to see what the expo was all about, maybe make some connections. At the time, my ex-girlfriend, who’d helped me edit the first book I wrote, SOMEWHERE OVER THE SUN, was working at Simon and Schuster. She invited me to a Young to Publishing party, where I ended up meeting Emilia Rhodes, who would later be my editor at Alloy. A few months, maybe a year, after that party, Emilia and I got in touch and not too long after that I’d written the first half of LET’S GET LOST and a proposal for the second half, which was how Harlequin picked me up.

I’ve been incredibly fortunate to garner a ton of support from Harlequin TEEN. They really believe in the book and the reach that they’ve had as far exceeded anything I could have possibly done on my own. I know self-publishing works for a lot of people, but it was not a good fit for me, and I’m thrilled to be where I am now.

3.) You’ve written two books now with multiple perspectives. Although you switched from first to third. Do you have a preference? Was there a particular decision making process of your narrator/perspective decision on LET’S GET LOST compared to SOMEWHERE OVER THE SUN?

I’ve always been drawn to multiple perspectives, as a reader and a writer. I like getting inside people’s heads, and I think my natural inclination is to use as many voices as a given story will allow. I usually prefer third person, although it’s never really a conscious decision, just something that naturally happens when I start writing.

4.) You seem to have a focus on road trips and that experience. How much of your own life has found its way into your work? Do you have any road trip experience (experiences) or people you’ve met you’d still write about? Anything or anyone you’d care to share?

That’s something else that isn’t necessarily a conscious choice. Like Mario Vargas Llosa writes in LETTERS TO A YOUNG NOVELIST, ” The novelist doesn’t choose his themes; he is chosen by them. He writes on certain subjects because certain things have happened to him.” Life experiences definitely work their way into my writing although I usually dress them up in fiction to make them fit the context or be more interesting.

This one I haven’t yet written about, although the character involved is too bizarre to leave out of my writing forever. When I was traveling across the country visiting friends last summer, I was enjoying a cup of coffee in Pasadena when a homeless man started insisting to everyone around the he was the world record holder for thumb pushups. Which is not a thing. Eventually, after lots of ranting on his side and some good-spirited chiding from a group of construction workers nearby, the homeless man, who goes by the name Ohio, whipped his shirt off and started assuming the push-up position, his thumbs stuck out like a hitchhiker’s. The construction workers and I prepared to witness a man breaking his thumbs on the sidewalk of Pasadena. A security guard stood by, a hand on his walkie-talkie. Tourists stepped into the street to avoid Ohio. “We’ll give you a quarter per thumb push up,” the construction workers say, elbowing each other in the ribs, winking behind sunglasses.

Turns out, thumb pushups are a thing, and I fully believe he holds the world record.

Thumb pushups… sound like there’s an entire book in there somewhere.  Homeless World Record Olympics?  Maybe not the book for Adi, but with his flair for penmanship, I’m sure he could pull it off.

This entry was posted in Books and tagged adi alsaid, books, harlequinteen, interview, let's get lost, travel, writing, ya. Bookmark the permalink.