100 Ghosts is a lot of Ghosts, The Perfect Amount

Here is a Twitter conversation I had with Doogie Horner in response to a questions I had about his forthcoming book 100 GHOSTS and working on the review:
Doogie Horner: “Writing about ghosts is like dancing about architecture.” –the ghost of Steve Martin
Reid Harris Cooper: Then it should be easy, I choreographed an entire ballet about the oeuvre of Frank Lloyd Wright. #liesthatlookedbetterinmyhead

If you’ve watched America’s Got Talent in a regular succession or follow comedians on Youtube or maybe even go to comedy clubs then you have had the privilege of hearing Doogie Horner‘s off the cuff, slightly irreverent humor that goes for fast laughs and good quips. If you haven’t well, you can either go watch him on Youtube or read him or twitter, his stuff is as funny on paper as it is on stage.

Another of his skills in comedy though is translating his thoughts into art. His first funny book was full of hilarious charts, all very pop-culture in nature, because, well, Doogie is a pure geek at heart. He loves all things books, comics, movies, television, all of it and it really shows.

His NEXT book is some of his most obscure humor though and it is very very quirky and quick witted but from the visual standpoint. Titled 100 GHOSTS: A GALLERY OF HARMLESS HAUNTS, it’s quite literally just that. 100 ghost drawings that are simply so harmless you can’t be scared but only laugh and smile at these silly-dilly floating sheets with eye holes.

While the majority of them are harmless, a few ARE creepy, scary, strange or bewildering. Especially things like Skull Ghost, but those as well as Muppet Ghost, Some Assembly Required Ghost, and Vinyl Ghost also show Doogie’s not only brilliance, but that he actually learned something in art school.

Yes, you read correctly, Doogie Horner is not a standup comedian, that’s his accidental career. At least I remember hearing that somewhere where he said something like that and in another video he mentioned going to art school. So let’s just go with that, because you know? 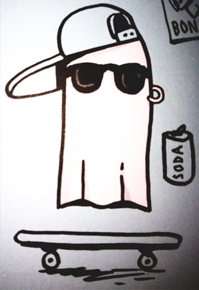 If THAT doesn’t make you want this book I don’t know what will. It means you have no soul, you aren’t even a harmless ghost, you’re a no ghost…. Not a Ghost. You know somewhere in this book there’s a ghost like that… probably, get a copy and check for me. 100 ghosts is a lot of ghosts!

100 GHOSTS: A Gallery of Harmless Ghosts from QUIRK Books comes out on September 10, 2013 for $9.95 in adorably sized hardcover.

For more information check out the books official website.