Kickstarter has been very hit or miss for me. It’s a combination of that and financial issues that have kept me away from actually pledging to anything. Most (but not all) of the projects I’ve pledged have been very satisfactory. A few as of yet have not yet reached my hands to properly be critical of them either way. The ones that have been super successful though are the comics. In recent weeks/months, I’ve received three great comics with awesome Kickstarter only bonuses and I’d like to discuss them here now. Especially as they are also now available to all, minus those bonuses through online stores and other resources.

GALATICAT: I have not actually heard or seen a thing about Galaticat when I hit on their Kickstarter, but the art by Kasey Williams won me over right away. Then I went and read a few strips and even asked writer Gene Goldstein a few questions and was sold. While this was one of those projects like pretty much any project I’ve pledged since a few of my large ones early on, I knew I had to at least come in on the level for some original Kasey art. 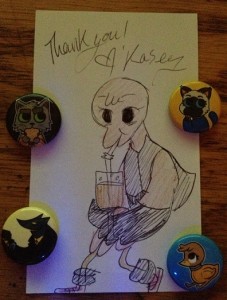 The strip is about a cab driver in space. A reckless dangerous cab driver, who is also very good at his job, but also risks killing his passengers from his erratic behavior. After enough complaints, a reviewer is sent out to him and in the end the reviewer lets the cab driver keep his license, but insists on staying on board for future fares to make sure the driver doesn’t kill anyone… and hilarity and adventures ensue. I forgot to mention that the driver is a cat and that the reviewer is a duck right? The cat is anthropomorphic, the duck is not. This only adds to the awesomeness of the story.

The collection of the webcomic has tons of great extras as well including bonus stories not on the web, concept sketches and pin ups from Chris “Elio” Eliopoulos, Mare Odomo, Pia Guerrera and many more.

While you can’t get a copy with buttons, a crazy cool postcard or buttons that doesn’t mean you shouldn’t get a book if you don’t have one, it like the other two I’ll be writing about deserve to be in your library.

Here’s the store link for GALACTICAT.

GOD HATES ASTRONAUTS: Ryan Browne is quickly becoming a beloved cartoonist through his work over at IMAGE on books like The Manhattan Projects and Bedlam, but before that he was cranking out his awesome stuff including Monstro City in the backpages of HACK/SLASH. On top of that though he made the madcap Gods Hates Astronauts, a superhero science fiction romp of absolute psychoticness with owls, big heads, cowboys, hippos, nazis, boxers, um, stuff and other things and a other stuff and also Carl Winslow with ape arms. Yes, that Carl Winslow.

The Kickstarter he ran was to produce a Completely complete edition and it is one of the most gorgeous things ever. A Hardcover with vinyl on the cover and tons of never before printed material. While Ryan’s original story recolored and remastered is the star of the book, the little origin stories are totally worth the price tag alone. You got art from Tom Scioli (Opus-8, G0DLAND), Tim Seeley (Hack/Slash), Hilary Barta, Jenny Frison (cover artist extradoniare) and more. On top of that there’s some crazy pin-ups from Ryan Stegman (superior Spider-Man), Zander Cannon (HECK), Ethan Nicolle (Axe-Cop), Mike Norton and of course more. The Kickstarter basic package came with amazing extras as well that if you missed out on it you’ll be “Mannnn…” such as a bookmark, sticker, print by Joe Quinones (currently of FF) and Maris Wicks and a poster by Paolo Rivera. For my copy I also ordered a copy of his special BLAST FURNACE collection as I didn’t have a copy.

there is a TPB coming out from IMAGE. Yes, this book is so great, so awesome and IMAGE loves Ryan that much that they’re publishing (or well at least dsitrbuting) the mass market paperback. So be on the look out for that.

EDIT:  For a short time the hardcover beauty is available again… RUN to the GHA etsy store and grab yourself one.

One extra note of how awesome Ryan is? I asked a small request for him to draw an Urkel for me because in the origin story for the ape armed Carl, Urkel was drawn by Greg+Fake and he indulged me. 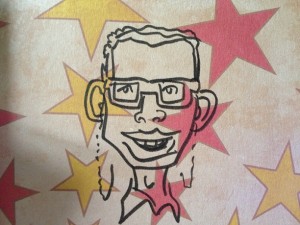 PENULTIMATE QUEST: Three of my favorite comics are Northworld Vol. 1, Vol. 2 and the side story bonus book by Lars Brown. So when Brown opened a kickstarter for a collection of a new story I went and read the whole thing on the web and knew he’d create a book that would be another one of those books that collects stuff you’ve seen before but is filled with extras.

What is exactly going on in Penultimate Quest isn’t completely clear but it combines fantasy, drama, swords, sorcery and a bit of sci-fiction. Actually possibly a LOT of sci-fi, but explaining that would really be major spoilers. What’s so great about is how “cute” Lars art is. It’s highly cartoony and that’s the energy that really makes his work so much fun.

Truthfully the collection itself doesn’t really have much in bonus footage but it was worth it none the less to read it in the way the artist wants it to be read. Plus by Kickstarting I got special stickers. I also opted for Lars drawing option which he is still offering for all orders on the book, just no stickers, I think.

This is another book worth owning if you don’t already. 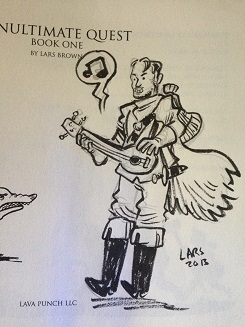 Here’s a list of books I Kickstarted that am still waiting for to eventually “review”:
TO BE OR NOT TO BE by Ryan North and MANY more
VERY NEAR MINT Vol. 3 by Justin Peterson
EARTHWARD by Bryan Q. Miller and Marcio Takara
MEATSPACE #2 and 3 by Josh Gorfain and Matt Furber
RUMPUS-ON-THE-RUN by Jess Smart Smiley