A Second Helping of PURE EVIL

It’s no secret that I am a Canadaphile, it’s been a major part of who I am going back to childhood. We’re not just talking shows most people know or like, I’ve gotten into the shows we never got here at least as they aired in Canada or without a DVD. Shows like Murdoch Mysteries, Blue Murder, Grand Star, and even Kids in the Hall: Death Comes to Town. Although the one I plan to speak of for this article did air in America on the lesser known FearNet, but that is an extra premium channel at least on my cable service, so the only way I ever saw the show was through the luck of eOne Entertainment’s DVDs. 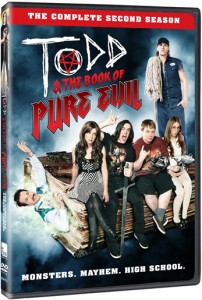 I got the first season of TODD and THE BOOK OF PURE EVIL when the cover first caught my eye, mostly the title and a very healthy dose of young Canadian talent who’d starred in some awesome Canadian shows including the stars show Alex House from Dark Oracle, it had longtime Canadian TV talent Chris Leavins dressed as what appeared a nerdy teacher, and top of that Jason Mewes was on the cover as a janitor. I grabbed it off the shelf right away, took it home, spun those episodes and loved it and then it was over. I searched the internet for where it would air if there was more to see. That was when I discovered it was either move to Canada (I want to, but that’s another story) or pay more on my cable bill to watch it on FearNet and I was like “Nooooooooooo!” and I just let the show go to the back of my mind and be happy I had that first season DVD full of funny, supernatural, gory, musical, awesome, weird action.

Then I heard word that Season two would be coming to DVD so I got excited and started looking into it. That was when I also discovered that the show would not be returning for a third season and not all plot lines got completed. Unfortunately I did NOT hear or discover the successful campaign for the animated film, but that didn’t stop my desire to see the second season, especially since I didn’t get FearNet.

In this second season they amped (sic) up everything. That’s usually the case of course with a show like this, the characters get older, so everything can get more mature. The evil is out there so it can only do what evil does and get more powerful, ambition gets more desperate, sexiness gets sexier and blood and gore well that has to get even crazier.

As in the the first season DVD, eOne made sure to stock this thing with enough extras that you’d have reason own this physical item more than just getting the episodes alone. Commentary tracks, deleted sequences, making of footage, the full versions of the music sequences. Oh, did I forget to mention the musical part of the show? Yeah, it’s a balls to walls heavy metal rock musical on top of everything else. Now you might be thinking that sounds weird, but if you’re anything like me, and I KNOW there are amazingly people with my pop-culture sensibilities, they’ll be your favorite segments.

TODD and THE BOOK OF PURE EVIL – The Complete Season 2 dropped on June 25th at a SRP of $19.98 and is available from your regular outlets (Best Buy, Target, Amazon, that local place) and I suggest you go and grab it and also season one if you haven’t. You’ll be getting many half hours of music, comedy, blood, sex, gore, silly, fun and awesome extras as well, what could be wrong about that? Nothing… absolutely nothing.

(disclaimer: I was provided a review copy of Season 2, but only at request and was already a huge fan of the program)

This entry was posted in TV and Movies and tagged alex house, canadian tv, comedy, eone, horror, jason mewes, Music, todd and the book of pure evil. Bookmark the permalink.