Through the power of The Mandible Claw and the minds of The Atomic Elbow, Danielle Matheson and the writers at Chikara a concept has actually been created for the entire Brayfabe Universe to exist.  While originally the concept was simply the idea of “What If?”/Elseworlds comics expanded into any idea, but the time travel conundrum of Archibald Peck causing multiple timelines like Back To The Future presents us with the intriguing possibility of true expansion.   These are not hoaxes, imaginary stories, but actual events that happened in another universe.  One could even consider that there is an Ultimatesverse version of wrestling where it ALL got redone even.  In JJ Abrams’ Star Trek it’s even been established that that is NOT a reboot of The Original Series, but an actual alternate timeline which can interact WITH TOS.  So the possibilities for the future of BRAY FABE are endless.  Hulk Hogan vs. Terry Boulder?  The tag team of Blue Blazer and Owen Hart?  Colt Cabana, Colt Cabunny and CP MUNK vs. Necro Butcher, Joker and Matt Classic?   All of this can happen and more in BRAYFABE!

First happening in Brayfabe is me showing off how I’m not really an artist, but I am a great visualizer.  One my first ideas for Brayfabe, was “What if CM Punk wasn’t straight edge?”  Now obviously storyline wise that would change the entire course of his life, his career and even more, but I decided in this particular timeline… all it would do is make him keep his mohawk forever and end up with completely different tattoos as the years went on.  Here is what I came up with: 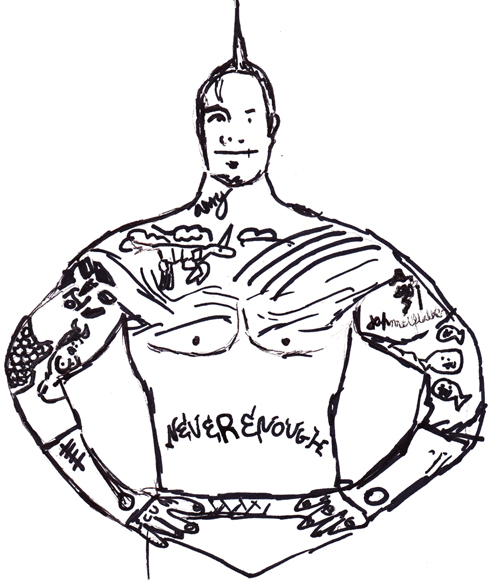 His new tattoos are:
Johnnie Walker, Autobots, a Beehive, a Coop Devil girl, Pirahhana, A Robot Unicorn, the words NEVER ENOUGH on his stomach, SCUM*BAG on his fingers and AMY on his neck

The future of BrayFabe is unknown. It may be more art from me. Just articles. Who knows, but it shall continue.

This entry was posted in Brayfabe and tagged brayfabe, logo, wrestling. Bookmark the permalink.