Here in my second Preview article for NYCC 2012 I focus on the panels for Friday morning to early afternoon.  This is ONLY about the scheduled panels, not press hours, signings, booth events, etc.  These do not reflect my own possible schedule, especially with the overlap existing here.  It is is meant to help promote panels which I think are worth going to and if I could I would go to all of them, and do everything else too.  Understand Con is again all about making decisions and sacrificing and compromising to get the best possible experience due to circumstance and situation and if you’re anything like me, that gets harder… so here we go.

Setting the Score: Composing for Film & Television
11:00 am – 12:00 pm
1A01
One of two panels focusing on the music and composition of genre orchestral/instrumentals. This one focuses on Television and film with the following talented musicians:
Dino Meneghin (MTV’s Teen Wolf)
Frederik Wiedmann
Jay Vincent
Kevin Manthei
and Will Bates

When I was much much younger I entered a costume contest with a seriously ridiculous prize at a convention held in New Yorker Hotel. That place where the Big Apple Cons take place now and stuff. I was 14 years old and Batman Returns had just come out. I had heard that Adam West was going to be the judge and I came up with the idea of working up a Batman TV show costume. I used a Mask from the Batman films, but cut the mask up and stitched the bat emblem on it onto a gray sweater and I put together a cape and a batbelt even. I even built my own old school batarang. I won. I don’t know where I placed, but about 65% of my comics collection as it exists. Anyways, here’s a photo from that. 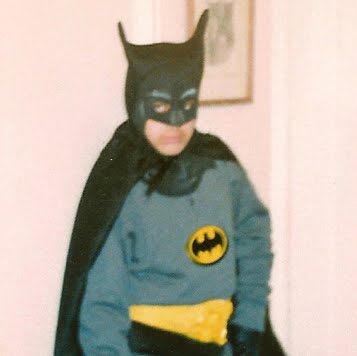 How to Get a Job in the Video Game Industry with Capcom
12:15 pm – 1:15 pm
1A14
This sounds like it might a really indepth panel with focuses all ALL elements of the industry. Not just the jobs that require a background in computer science, programming skills or artistic talent, but the jobs I’m qualified for but don’t completely now how to pursue such as Public Relations, Advertising, and Producing and there’s a chance after to meet with the panel and network. This will be a great opportunity for young programmers, concept artists, etc as well to do the same.

Maestros of Horror & Sci-Fi Music
12:15 pm – 1:15 pm
1A01
The second of two panels focusing on the music and composition of genre orchestral/instrumentals. This focusing on developing for video games in genre. It features the following talented award winning music writers:
Jason Graves
Kevin Riepl
Sam Hulick
Sascha Dikiciyan
Tom Salta
and
Cris Velasco
On top of that though, the disco king, electronic genius, master producer and living legend, Nile Rodgers, shall be in attendance, having done the lead production on Halo’s soundtracks.

You get the point. Honestly I’m not sure what brings Christopher to NYCC. I mean he will always be Doc Brown, between 2011’s NIKE Mag promotion and the Telltale Game’s BTTF, the character is alive and well, but that isn’t enough is it? I mean maybe it is, but he does a horror film coming upand a children’s supernatual adventure called Mickey Matson so he has plenty to promote, but it doesn’t seem like he’s promoting anything specific… still, it’s Christopher Lloyd, I’m not complaining.

Debuting the Vision Machine iPad app!
12:30 pm – 1:30 pm
1A21
Greg Pak’s Vision Machine is one of the coolest and best projects I’ve seen in forever. Drawn by RB Silva of DC Comic’s Jimmy Olsen and also The New 52 Superboy it’s a free comic that is excellent and NOW it’s an iPad motion/animated comic. Vocal actor Phil Lamarr is part of it and the comedy music genius Jonathan Coulton is as well and if you’ve missed your opportunity at a free copy of the Vision Machine GN, this is is another opportunity.

Sir Terry Pratchett introduces…DODGER
1:00 pm – 1:45 pm
Unbound Stage
This probably will be one of the final times Pratchett will ever appear in public. It’s even possible that this Charles Dicken’s inspired Young Adult novel will be his last book. I am a huge Discworld fan, but have also loved Good Omens and his Johnny Maxell series.

As you can see the three above panels is where overlapping becomes a real issue. All three panels excite me for different reasons and I don’t know what to do… but for some fans, it’s the next overlapping that is truly insane!

Dark Horse Presents: Yoshitaka Amano
1:45 pm – 2:45 pm
1A21
The genius behind the artistic design of Final Fantasy who has also done his share of comics work and other films is in America, a real rare treat in promotion of his Dark Horse published art collection and his panel is booked against the following.

Grant Morrison Spotlight
1:45 pm – 2:45 pm
1E13
One of comics favorite writers, the man behind The Invisibles, Flex Mentallo, All Star Superman, Batman Incorporated, etc. etc. etc. and who just had his own comics convention has a one hour sitdown retrospective. I’m shocked this isn’t in the IGN theater!

Sean Astin Q&A
3:00 pm – 4:00 pm
1A10
Sean Astin is at NYCC because his role in the new Teenage Mutant Ninja Turtles cartoon, but a recent episode of SyFy’s Treasure Hunters showed that Sean has a great affinity and love for all things Sean Astin, from Goonies to Rudy to Lord of The Rings, the guy is as big a “geek” as his LOTR co-star Elijah Wood, so a sitdown talk with him should be quite entertaining.